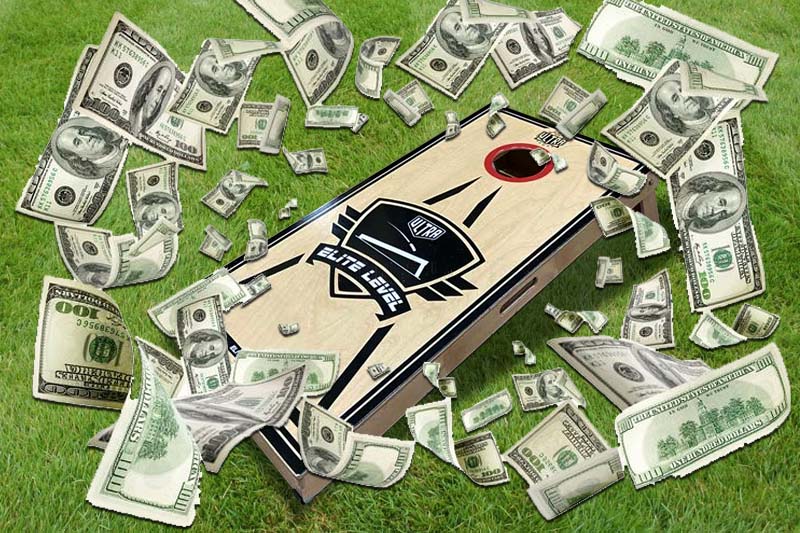 Within the world of cornhole, sponsorship is a hot topic.  Professional cornhole players use financial sponsorship as one of their main sources of revenue.  Sponsorship money can be used to fund travel, lodging, and participation in tournaments. Top players are now making a full time living when you factor in their sponsors. Non-pro players are often searching for sponsorship in some form too.  Usually non-pro players acquire cornhole sponsors in the form of free or reduced prices on bags, gear and apparel. Occasionally they will get financial compensation as well.

A cornhole sponsorship is typically an exchange of money/goods/services for recognition of some sort. The assets that a company may receive in return for a sponsorship may include a “thank you” after a top finish, a podium picture holding up a bag, a social media post, or promotion of the brand amongst new cornhole players. How can we gauge the “return on investment” that a sponsor company receives?

To avoid a disproportionate relationship between a player and their sponsor, there are certain agreements put into place in writing. Players are paid a sum of money for an agreed upon period of time. Key to this are expectations a player should be meeting within that time frame. Standard expectations include a player dressing in branded apparel, throwing branded bags, mentioning a company’s name on the podium or during an interview, wearing a branded jersey, and generally promoting a company when an opportunity arises. When a player forgets or intentionally neglects to follow through on these aspects of their contract, the company’s return on investment diminishes. The player still has their funding, gear, and apparel from when they signed their contract. The company is however, not receiving their end of the bargain.

When a contract ends, a player may go back to their sponsors and ask for more money, better apparel, or more gear for the upcoming season. The additional money or extra gear requested are based on a player’s assumption that their performance was exemplary. What a player may forget to consider is that they have already been compensated for their performance for the previous year.

Going into new contract negotiations requires forethought and reflection. A new contract will not be based solely on what a player has provided in the past, but also what they can provide in the future. If the player has performed excellently on the boards, but has not represented the company’s interest in other ways, the potential return on investment decreases. A company will want to see if a player has lived up to previous agreements on social media, what jerseys were worn in competition, and if a player had an impact on the company’s bottom line.

The world of professional sports is unique. Sponsors agree to pay a player a specified amount in advance of any performance. Sponsors are taking a risk on each and every player that they financially compensate. More and more sporting companies are incorporating incentives to create contracts that are more friendly for companies and allow players’ performance to pay off for both parties. For 2023, Ultra has split the difference by giving players a base amount, as well as plenty of incentives. The base amount assists players with upfront costs while the performance incentives afford them the possibility to increase their compensation. This arrangement will split the risk between the players and their cornhole sponsors.

At Ultra the focus is on building a TEAM.  This is done by sponsoring professional and advanced level cornhole players.  We believe that creating a team atmosphere is the best way to support our players and promote our equipment and apparel.  Team Ultra is more than just a collection of elite cornhole players. It’s a group that works together sharing experiences and knowledge.  It can be as simple as coordinating travel plans or finding last minute partners.  The team is always there to support one another on and off the court.

As with every team, new players get added and sometimes players do not get offers to return.  None of these decisions are made lightly and there is a ton of consideration that is given before making any decision.  This year, Ultra received more than 120 pro and PDC applications for sponsorship.  We are committed to supporting the American Cornhole League and professional players in addition to helping grow the sport.  In order to do this, Ultra will be sponsoring 43 ACL Professional Cornhole Players for the 2023 season.  This works out to 17% of the 251 pros that will compete in the ACL.  Additionally, we will sponsor 10 PDC players that will be competing at most, if not all, of the pro national tournaments.  As a Tier 1 ACL-approved manufacturer, Ultra’s sponsorship will provide over $600,000 in financial support to Team Ultra players.

This is all made possible by the outstanding support of our fans and customers around the nation. We haven’t forgotten about YOU!  We have worked to put together an Elite Level Team that will not only perform on the pro circuit but will share our products regionally and locally throughout the country. At the same time, we have brought our release prices down to benefit YOU. Please look to these team players when you want to learn about a new product or try a bag. And as always, Follow our Facebook account to get information about the latest releases.

View all posts by vorticyweb →